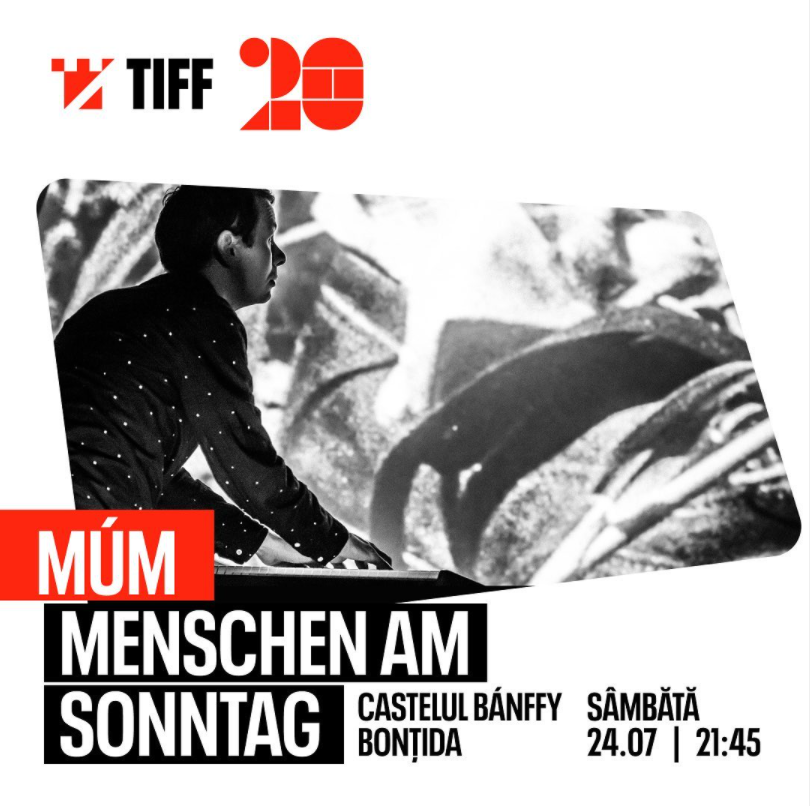 Electronic rhythms, ambient sound, and indie-pop experiments blend together in the music of the Icelandic group MÚM. Their projects have been around the world, mesmerizing audiences with their hypnotic sounds, which transcend conventional genres. Saturday, July 24, at 9:45 PM, in the spectacular decor of the Bánffy Castle in Bonțida the band will perform live alongside the masterpiece of German silent cinema Menschen am Sonntag / People on Sunday (1930).

A few years before making it big in Hollywood, a group of German filmmakers, including future Noir masters Robert Siodmak and Edgar G. Ulmer and future Oscar-winners Billy Wilder and  Fred Zinnemann, set up a unique collaboration, an experiment which became a true box office success. Straddling the border between fiction and documentary, Menschen am Sonntag follows a group of Berliners enjoying a summer day. Marlene Dietrich songs used to supplant the sound in most screenings, but TIFF will offer a new, updated experience with MÚM’s original music.

The snow-smothered Fargo, Joel and Ethan Coen’s 1996 double Oscar-winning cult film, comes to Transilvania IFF with the original music of the French trio Fragments. An infusion of electronic and ambient textures woven with post-rock elements will accompany audiences on their tense journey through the Minnesota flats. Inspired by a series of late 1980s crimes, the thriller, featuring Frances McDormand, Steve Buscemi, and Peter Stromare, was included among the most important 100 films in the history of cinema by the American Film Institute.

Presented by the French Institute in Romania

Dante Aligheri’s universal legacy is celebrated 700 years on in a cine-concert presented by Edison Studio. The artistic collective will accompany live the screening of the 1911 Inferno, the first Italian feature-length film, presented in a digitally restored version. A gem of silent cinema, Francesco Bertolini, Adolfo Padovan, and Giuseppe De Liguoro’s film gets a new soundtrack that propels it into a dream dimension due to a continuous short-circuiting of recreated voices, surreal sound landscapes, and ambient sound that push the conventional limits of cinema.

Presented by the Italian Cultural Institute in Bucharest

Julie Roué plays piano and guitar, among other instruments, and has scored over 40 films, some of them awarded in Cannes. Her style combines classic elements with jazz, electronic, world, and experimental music, as well as strong pop influences. At Transilvania IFF she will be accompanied by percussionist Stan Delannoy and Louise Belmas (keyboard, laptop).

Known for her original experiments, Simona Strungaru will present at TIFF her own score for Malombra together with Sebastian Burneci (trumpet) and Adi Tetrade (percussion). A pianist and a composer, Strungaru is the permanent conductor of the Bucharest Jazz Orchestra and of Sonomania, has composed symphonic suites, live electronic music and live street art concerts, animation scores and musicals. This event is her comeback at Transilvania IFF after 2016 when she conducted the Cluj Magyar Opera in a memorable concert of Haxan at the Bánffy Castle.