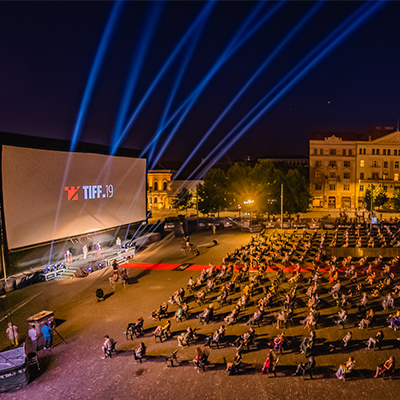 The best films of the TIFF 2020 edition and the filmmakers of the moment were applauded on Saturday evening, August 8, at the Awards Gala of the Transylvania International Film Festival, organized for the first time in the history of the event, in the Unirii Square in Cluj-Napoca. The film Babyteeth, the debut of Australian director Shannon Murphy, starring Eliza Scanlen, was named the grand winner of the 19th edition of TIFF and was rewarded with the Transylvania Trophy, worth 10,000 euros, ”for the joy of life told through the experience of our passage beyond''. The film will be projected in a special screening today, August 9, at 8:30 PM, at Echinox, Universitatii Street, 7-9

Also, the public decided that the same movie should be awarded the Audience Award. Following the votes given by the spectators, Babyteeth received the prize, offered by Mastercard. Producer Ada Solomon, director Adina Pintilie, actor András Hatházi, playwrighter Csaba Székely and writer Philip O Ceallaigh have nominated two winners of the Best Direction Award, worth 3,500 euros. Tim Mielants impressed the jury with Patrick, a story that "managed to create a special and bizarre world, with the greatest naturalness". Director Zheng Lu Xinyuan was awarded ex-aequo for The Cloud In Her Room, "an unconventional cinematic (and cinephile) experience that reveals an emerging director's voice of impressive courage and talent."

500 guests, spectators and journalists were present at the gala presented by the president of the festival, Tudor Giurgiu, together with Amalia Enache, and broadcasted live. The show, organized in accordance with the rules of distance and in compliance with safety measures, began with a musical moment offered by the Osoianu Sisters. Special guest at the event, the artist Marina Voica sang two of the most famous songs from her repertoire. In honor of the over 40 years dedicated to theater and film, Maria Ploae "an expression of sensitivity, without whom the history of Romanian film would not have been the same", was awarded the Excellence Award, offered by Mercedes- Benz, at the TIFF 19 Gala.