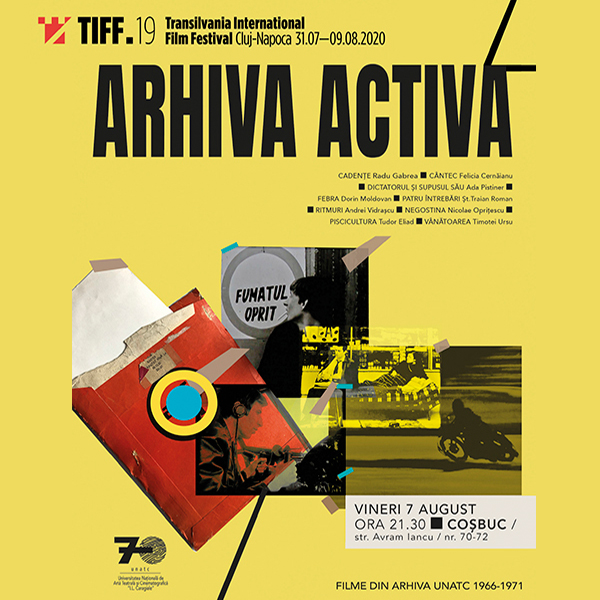 After decades staying in the boxes of the UNATC Archive "IL Caragiale", nine student films from the 60s will be screened for the first time at TIFF.

The Active Archive Program - UNATC Films (1966-1971) will be presented at Coșbuc, today, at 9.30 pm. It includes 9 short films made by the first generations of student directors and operators after a break of almost a decade. You will recognize famous actors (Toma Caragiu, Mitică Popescu, Margareta Krauss, Cornel Coman, Mircea Diaconu, or, in a unique position, Romulus Vulpescu) and you will be able to admire some of the first films of some filmmakers that would later become famos ( Radu Gabrea, Ada Pistiner, Felicia Cernăianu, Iosif Demian, Timotei Ursu, Vivi Drăgan Vasile).

A discussion with part of the project team will take place at CASA TIFF, shortly before the screening, today, August 7, at 5 PM. You will find out more about what the work with these archives meant and what are the plans for the UNATC in the near future.

Participants: Liviu Lucaci (Rector of UNATC), Alex Sterian (Vice-Rector of UNATC and coordinator of the film digitization process), Vlad Ioachimescu (Dean of the Film Faculty of UNATC), Doru Nițescu (Director of the Department of Directing of UNATC) and Andrei Rus (University Lecturer and program curator).