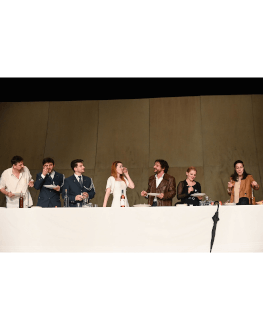 ‘Before the holidays, “Radu Stanca” National Theatre in Sibiu wishes to offer spectators an important gift – the exceptional premiere of “Three Sisters” by Cehov. Andreea and Andrei Grosu are two young artists who have already received the Iulian Vișan Award at the Sibiu International Theatre Festival, and after their success with “Who’s Afraid of Virginia Woolf?” and “Autobahn”, they are once again showing us their talent. These productions were two very special experiences for our actors at TNRS, as well as our audience. I remember that this autumn in Chișinău, despite the restrictions, the theatre was packed, there were people standing. It’s been quite a while since I’ve seen this happening! “Three Sisters” is a play with remarkable characters. It is exceptional to have actors such as Ofelia Popii, Marius Turdeanu, Mariana Mihu-Plier, Diana Văcaru-Lazăr, Adrian Matioc, Raluca Iani, Ciprian Scurtea, Mihai Coman, Gabriela Pîrlițeanu, Adrian Neacșu, Iustinian Turcu, Cendana Trifan, Andrei Gîlcescu, Horia Fedorca, and Viorel Rață. We are talking about extraordinary confrontations that will also be turned into a very special film made out solely of monologues. It is a great gift for the holidays! I would like to congratulate the actors, the directors, the technical crew, and all those that have contributed to producing this performance. It was a considerable feat, given these difficult times in which many of us have been tried by this disease, but we didn’t let it defeat us. It is important to give you this gift, along with our heart. Therefore, dear spectators – our raison d’être, we are inviting you to witness the birth of a miracle!’, said Constantin Chiriac, the manager of “Radu Stanca” National Theatre.