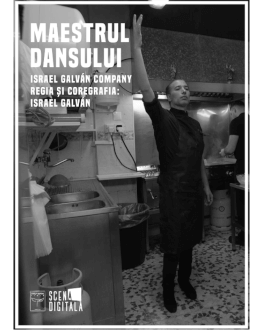 Directed and choreographed by: Israel Galván

Commissioned by UCLA’s Center for the Art of Performance

Produced by: IG Company in association with EdM Productions

IG Company is supported by INAEM

Performance presented in Spanish, with translation into English and Romanian

Not recommended to those under the age of 6

During this past year, Galván has sought to “servir el baile” (serve the dance) by finding other spaces to “Seguir Bailando” (keep on dancing) until a semblance of normalcy is returned. Maestro de Barra (Master of the Bar) comes from Galván’s attention to the spontaneous music and dance culture associated with cafes and bars worldwide. As theaters remain closed, it feels in tune with this moment in time. Known for his ability to transform his body into an instrument and for his hypersensitive ear, Galván will prove his ability to ‘hear’ the air of public spaces. In the days of confinement, productive activities have lowered intensity and the bars have taken center stage as public spaces. In the city motor vehicles and air conditioners make less noise. Just as the birds with their trill have taken over the city and its sound, the sounds of the bar now take the place of music. The recited tapas, the chalk writing on the bar, the screams from the kitchen, the conversations, the children running around, the banging on the tables, everything fell into a rhythm. Galván’s body will amplify their internal rhythms and rites, pauses and silences, using them as the score and to point out that everything one can hear, can also be danced to. Sounds can be ordered, accompanied and understood as a rhythmic vibration that can be translated into movement. Israel Galván, with his hyperesthetic ear, is thus classifying bars as schools of flamenco art. In reality, flamenco ‘bailaors’ have learned as much in bars as in dance academies. Many bars display a sign that says: “singing is prohibited here,” because it is the bar, itself, it is the bar that sings. The entire bar is made, as if by a miracle, theater, flamenco theater.