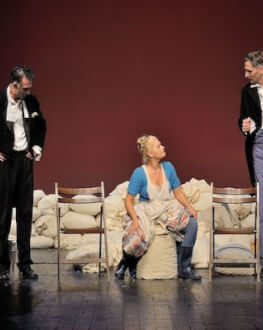 A Marriage Proposal by Chekhov is a dramatic study on lonely people who have not found their half, confused people who cannot find neither their place nor balance. Their only wish is to spend the rest of their life with someone, to get emotionally involved in a relationship. But the break to their happiness is their nature itself, their way of being. For the hard-working Natalia Stepanovna and her suitor Lomov – already at a critical age, it is hard to hold in their impulsive and agitated temper. Instead of their bond becoming a harmonious love, they raise such tension between each other that it culminates into a great scandal, due to the fact that they are always standing in opposing positions and, when they try to express their love, they do it through a tirade of insults.
The conflict of their relationship is based on terms such as: mine – yours, I want – I do not want, mine is better – yours is worse, mine is cute – mine is superb – yours is horrible, I am right – you are wrong. All these elements and continuous contradictions cause them not only spiritual distress, but also physical suffering: Lomov’s heartbeats get more alert, his feet sink under him and his eyes flash fire; Natalia suffers from panic attacks. These conflicts are equally tensed and childish. They are always at war with each other. Fights start from nothing, they make a mountain out of a molehill and spirits get harder to calm down.