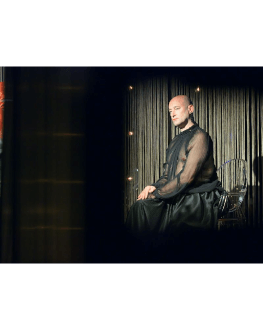 Man and woman - relics of a past world

In a play of travesti ingeniously orchestrated by Hunor Horváth, each actor successively becomes both the Marquise de Merteuil, and the Vicomte de Valmont, two shady characters, who enjoy gradually and arrogantly destroying everything around them, by using a set of moral concepts that they themselves play. They even have no mercy on themselves, mirroring their physical degradation in each other. To them, sexuality has become a power game dominated by the lust for destruction. Nevertheless, in order to be able to enjoy their mutual passion, they engage in role play, with Merteuil interpreting Valmont and the virgin niece, while Valmont plays Merteuil and the pious aunt. This game allows them to explore the identity of their sexes, bodies, control and devoutness, without ruining their reputation to outsiders. A world that only makes differences between masters and subjects and that encourages a battle between sexes which will yield no winners. The four actors enter the play with two characters by Heiner Müller to analyse passion in a world where bodies have become political and people are captive, in the context of a world that has already been through numerous falls.

‘I think nowadays theatre should be a place of collective reflection. We lack the time and the space for the most significant mechanisms allowing societies and people to get in touch with themselves and the world. From the very first reading, I sensed that this text would tackle the failure of our Western values. At some point, humankind was very hopeful, and we enjoyed the benefits of the modern world. Progress was nice, but promises were unfortunately not truly kept. The values that stabilized our culture are ends rather than means, weapons for our inflated egos. Patriarchy manifested in economy and resulted in lower empathic capacities. For a moment, conversations draw our attention away from internalizing the fact that our decline is near. In “Quartett”, the man discovers that it’s better to be a woman than a winner. The woman who, throughout her life, fought against this power relation poisons the man and remains all alone. Adam and Eve have reached the end. Finally, cancer is all that’s left, like an unborn child growing inside of us. Love would have been the force that could have postponed our destruction. And yet, what will happen next? The answer to this question is up to each and every one of us...’

Performance created in partnership with Bucharest Goethe Institute and the Bucharest Austrian German Forum and supported by the IFA (German Institute for International Cultural Affairs).