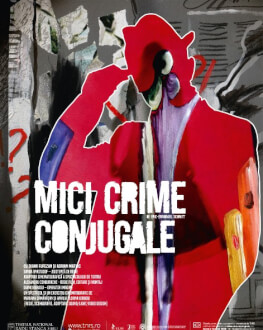 Can love survive? Not only when the initial impact of the first date wears off, but even after facing time, illusions and disillusions, deception and disappointment?

Gilles suffers from memory loss following a domestic accident and his wife, Lisa, helps him rediscover the house, his existence, as well as their life as a couple, which, in the end, they both reconsider. Thus, the major communication and perception differences on life and their relationship as a couple, that needed to be cleared and shared, reach a new dimension. Silences must be put aside and frustrations must be brought to light. It remains to be seen what’s left of a marriage when they both come clean...

Eric-Emmanuel Schmitt (born 1960), prose and play writer, is one of the most popular and appreciated writers of our times, as his books have been included on best-seller lists in numerous countries. Having graduated from the prestigious École Normale Supérieure in Paris in 1983, three years later he obtained a PhD in Philosophy. He received positive criticism when he debuted in 1991, but it was his second theatre play, “The Visitor”, that brought him truly unanimous critical appreciation. Starting 1994, he started constantly publishing, besides theatre plays, novels (“The Sect of the Egoists”, “The Gospel According to Pilate”, “The Alternative Hypothesis”, etc.), short stories and short prose (the best-known is “Oscar and the Lady in Pink”). He has received over 20 literary prizes and distinctions, and in 2011 the French Academy awarded him the Grand Prix du Théâtre for his lifetime activity. The same year, 2001, he was appointed Chevalier des Arts et des Lettres.

Mariana Cămărășan – ‘Try as I might, I cannot fulfil the act of honesty, staggering as high-rope walking with no safety net. I relearn to live in the absence of word, image, sign, suggestion, outside theatre spaces of synthetized sound and reflector lights, as the wind blows slowly, face to face with the sky, the forests, waters, hills and mountains, but known and unknown lines from past and future productions resound in my mind, my performances – my homes, my loves, my lives, my dreams, my lies, and my truths.’

Amalia Florina Iorgoiu – ‘I have always searched for words. In the past, for poetry, now for performances, too. But words are born from feelings and imagination, so all I do is live and dream through and for the poems or the performances I will create. (...)

I am at a crossroads, searching. I don’t want to go back, but the road ahead is buried in haze. All I know is, I stand beyond the haze. This is what theatre is about: yourself and countless other discoveries, through surpassed limits and the surprises you encounter on this path towards yourself. About questions. About the incomprehensible that must be understood. The characters. How surprising some of their actions can be (even to themselves, as they become a burden), or even their inaction. To understand and get to know them, as much as you search inside and beyond yourself... And sometimes, standing face to face with a certain character, a stranger at first, I wonder whether the character would like to know them, whether their drama may be too painful... I wouldn’t want to only inflict pain, but a touch of compassion, too, as well as understanding, tolerance, acceptance, joy, illusion, dream, peace, comfort... (...)

I would like to be able to bring to the stage stories that make us all better people, and remind us

to be kind, accept that we are different, that every one of us has their own truth, their own belief... that we are all people experiencing feelings and carrying our own stories. (...)’

The Last Raid of HumanKind