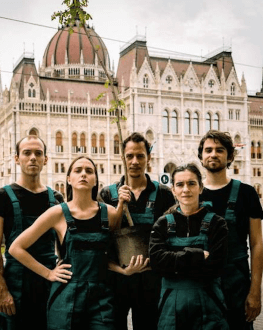 Botanical saga on an alien species that became Hungary’s most patriotic tree.

The black locust or false acacia tree, considered the most Hungarian tree by 63% of the Hungarian population, arrived 300 years ago from North America, and took root in a Hungarian aristocrat’s garden. After centuries, this exceptionally persistent and adaptive species outpaced all native types to become Hungary’s most widespread tree. Nevertheless, the black locust is divisive and triggers a range of emotions among Hungarians. Many environmentalists dislike and criticize the tree, while thousands of other people earn a living from it.

In 2014, an EU regulation was passed on the prevention, eradication and management of several alien species. Ecological issues suddenly became mixed up with politics. Surprisingly, the ruling party of Hungary, led by Viktor Orbán, despite previously suggesting eradicating the invasive alien black locust tree, voted against the regulation, and used the case as an argument in their domestic anti-Brussels campaign, saying “We send this message to Brussels! We are protecting Hungarian land, free pálinka distillation, honey and the black locust-tree!”

Hungarian acacia tells how this native American tree became a national and political symbol in Hungary.

But how can a tree, become subject to political debates? How do political actors use, re-mix or even manipulate ecological facts? Having examined the story of the black locust, Kelemen and Pálinkás launched a movement aiming to “rebrand” this plant as a symbol of open society. Members organised black locust planting events at politically symbolic locations in order to propagate a liberal, inclusive ideal of community. “Anybody who can take root in Hungarian soil can be Hungarian.”

The performers re-enact these actions on stage, play music, recite political speeches and present the group’s future plans. The question is whether their movement is going to take root? Are they going to be as persistent as the black locust trees now thriving in dry flatlands and abandoned mines?

Bio: Kristóf Kelemen is a young director and playwright based in Budapest, whose documentary theatre production While You Are Reading This Title, We Are Talking About You was a great success and was presented at several Hungarian and international festivals, including Temps D’Image Festival in Cluj and TESZT Festival in Timisoara. His recent work, Observers, that Kelemen wrote and directed got critical acclaim. Kelemen was awarded the Hungarian Contemporary Drama Prize and the production was nominated for the Halász Péter Prize. Kelemen graduated as a dramaturge at the University of Theatre and Film Arts in Budapest, where he is currently a PhD student. He is a dramaturge at the Radnóti Miklós Theatre.

Bence György Pálinkás is coming from a visual arts background and has been working on language-based projects recently. His focus is post-dramatic theatre, he organises community based and educational projects. Recently he was a guest researcher at the Slade School of Fine Art – UCL, London, the Centre for East European Studies – University of Warsaw and in Rome with the Peter and Irene Ludwig Foundation Aachen research grant. He is a student at the Doctoral School of the Hungarian University of Fine Arts.http://palinkasbencegyorgy.hu/