Mirage is a thought-provoker in the arena of self-defined and externally imposed cultural and political realities. It deals with the annihilation and decay of contemporary dance, the state of inertia and vulnerability, loss of faith and the demise of the movement. It is about calling to question our everyday feelings and notions. Now, in this fictitious(?) space, struggling with gravitation, the performers extract final situations from themselves and each other. Now the discourse is defined by a piece from Béla Bartók’s For Children. The familiar melodies are part of our personal and common culture, conjuring up memories imprinted in childhood, atmospheres and the sensation of getting to know the world. The hierarchical relations of culture and art, and moral conformity with values generated by the powers that be are in contradistinction with the memories of childish innocence and ignorance. In this field of forces, the ego becomes conflicted, creating a powerful emotional state. Carrying banners inscribed with ‘loathsome’ ideas and adjectives expressing negative criticism of contemporary art, we run out into the field again.

Bio: Hodworks was founded by choreographer Adrienn Hód in 2007. Besides permanent members, the Budapest-based international company works with artists invited from different field of arts. Hodworks regroups sensible, proactive and forward-thinking creators having their own creative and concentrated working methods. They focus on the human body itself, liberated from any mediators, limits, sets or props. Hodworks pieces, always taking a new and progressive direction, are result of a long, creative body research based on improvisation, which appears in a strictly structured form on stage. Hód choreographies own a delicately developed, fine, high-quality language balancing between the exact and the very abstract representation. These pieces stimulate the audience’s spirit and senses and invite us doubting in the known and opening up towards the unknown. They do not compromise; they do not want to please.

Adrienn Hód is a unique and innovative creator of the Hungarian contemporary dance scene, well-known internationally. Her pieces, Basse danse in 2012, Dawn in 2014 and Conditions of Being a Mortal in 2015, have been selected into the 20 most outstanding contemporary dance pieces by Aerowaves European dance network. Her company, Hodworks regularly appears at international festivals and theatres.

Her choreographies tend to deconstruct, destabilize, and re-build already existing dance structures. The focus of her work is the performer’s status, as related to extreme human states and verbal and physical expression. Hód’s performances challenge taboos, enriched with a robust but delicate humour: a radical study of the body, free of prejudice. She opens up a parallel reality, which is built up from the unconscious and the ecstatic. Her audience is attracted to a “grey zone” where “presence” dominates “meaning”.

The performance will be followed by an artist talk. 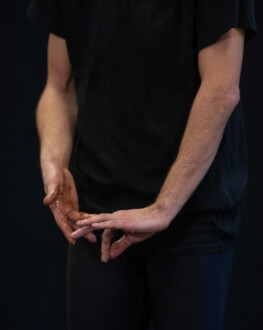