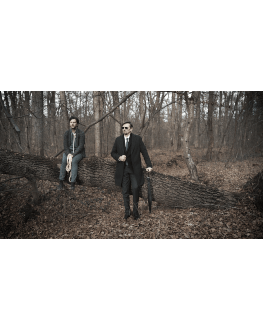 The most beautiful day

Two characters, one existential problem - to commit suicide or not. More precisely, when does a life become unbearable – when destiny reveals itself as a permanent farce, always throwing spanners in your work, or when even your most insignificant whims are satisfied? This is the beginning of a friendship that may help The Gentleman and The Young Man to discover the true value of a human life.

In a dense social context dominated by egotism, this (philosophical) adventure bordering tragi-comedy by Mrożek is an invitation to discover, in the happiness shared through acts of kindness and sacrifice, perhaps the only way to save ourselves and to appreciate the beauty of one’s own life.

Sławomir Mrożek (29 June 1930, Borzęcin, Poland – 15 August 2013, Nice, France) was a Polish playwright, regarded as one of the most important European satirical writers of the second half of the 20th century. After making a name for himself in journalism as a cartoonist and grotesque, sharp, humorous short articles, in the ‘50s-‘60s he became a prominent figure of Polish literature who managed to deceive the vigilance of Communist censors through the absurd character of his plays. He left Poland in 1963 and settled in Paris, then in 1989-1996 lived in Mexico. Mrożek returned to Poland for a few years, but in 2008 resettled in France. Some of his most renowned plays are The Police (1958), At Sea (1961) or The Emigrants (1974), as well as Tango (1964), which was adapted by Tom Stoppard for The Royal Shakespeare Company in 1966.

‘We live isolated and die alone. The destiny is our own psyche leading us with a will that isn’t ours. We need the other to find a purpose, a meaning in a competition pushing us to extermination. What is the meaning of losing? What is the meaning of winning? What's with this almost wild need to be a winner? In just a few moments during a life lasting as long as a day, laughter is our salvation. We live in cliches, create rules and break them only to build others, fight for freedoms that only restrict us. Laughter is the only thing that can free us. Let us then laugh at life and at death, at love and at hatred, at the concept of being human!’