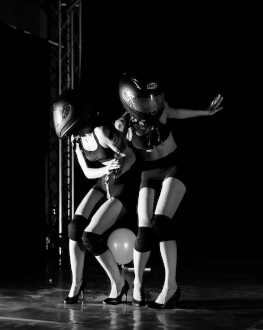 “2  Women” is a feminist contemporary dance performance/show, inspired by the woman’s condition in today’s society but not just in today’s society, is an old problem. We realise that throughout history not much has changed with regard to the status, condition, and the presence of women in positions of power, the way in which we are socially separated in two distinct categories. “2  Women” is a show that suggests a perspective on these problems that is both humorous and serious. This show is recommended for everyone. A man can also be a feminist.

*The term feminist is misunderstood especially in Romanian society. I did a research before I started to work in the studio and ask people, different people what is a feminist and  I realized that they have a totally wrong perception, let.s say uninformed. So we use some hilarious but very sad answers in our performance precisely to bring this serious problem to the front.

Linotip represents for us the space and the time in which we concentrate our attention on the ways through which we could develop the contemporary dance on the independent art scene.

The event is part of the Reform to Perform project.

A NEW AND BETTER YOU