this is where we draw the line 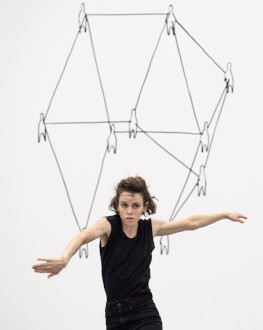 In this performance the gathering of the audience literally becomes a network in the art space, where new links with strings constantly generate and change various spatial constellations. The performers Karin Pauer and Arttu Palmio provide instructions, which are used to develop and discard divisions, connections, boundaries, and patterns. Based on black-and-white concept drawings by the visual artist Aldo Giannotti and his dramaturgical proposals, in combination with the ambient soundscapes of Paolo Monti, the audience is incited to conceive themselves as a choreographic community in which each constituent element is interconnected with the others and absolute autonomy cannot exist.

Bio: This is the first in a series of collaborative works between visual artist Aldo Giannotti and choreographer and performer Karin Pauer. Together with Paolo Monti and his ambient sound project 'the star pillow' and performer Arttu Palmio they investigate social structures through minimal aesthetics and empathetic negotiation.

This project is supported by DANCE ON TOUR AUSTRIA – a project by Tanzquartier Wien in cooperation with the Federal Ministry for Europe, Integration and Foreign Affairs.