Mike Shepard is a writer and comedian who has written for BBC Radio 4's The News Quiz, BBC Radio 4Extra's Newsjack and the award-winning Comedians Theatre Company. He is the regular host of the historically themed comedy night, History's Greatest Monster, and took his own hour-long stand-up shows to the Edinburgh Festival Fringe in 2013 and 2014.

David Whitney was trained at the Drama Centre from 1998 to 2001. He was very lucky to be in the last intake year to be trained by the two genius mentors Christopher Fettes and Yat Malmgren. He was there at the same time as both Tom Hardy, Michael Fassbender and Russell Brand.

After graduating David spent the following years pursuing his love of theatre and Shakespeare.

Fast forward a few years… David is in America, and after telling a string of lies he found himself in a position where he had to perform his first ever stand up comedy gig at the Friars Club in Beverly Hills. He hasn’t looked back, and now regularly plays some of the biggest clubs in the country.

David is still an active actor. He was involved in the BAFTA wining comedy Fonejaker and is acting in many films. 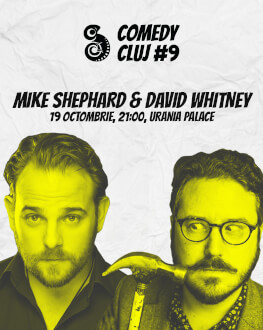