The 13th edition of the One World Romania International Film Festival of Documentary & Human Rights will take place between the 20th and 29th of March, in Bucharest, and will present current realities from all corners of the world through the films, the debates and the events prepared for this occasion.

The 2020 edition will focus on the freedom of mentalities, an area where no revolutions, but only slow evolutions take place, small steps that are measured in decades, sometimes even centuries. In this fight, no battle is definitely won, as it is evidenced by the regular resurgence of racism, anti-Semitism or xenophobia.

The poster of this edition (created by Maria Draghici and based on the author's and the artistic director of the festival, Andrei Rus’ concept) illustrates the evasive features of the scapegoat, which can be any minority, depending on the particular social and historical context that produces it. At the core of the poster is the Man without any clear identity in the eyes of the majority, neither rural nor urban - in short, the foreigner, the minority, the margin, the periphery, everything that is not included in that said majority. It can be a Roma, a homosexual, a poor person or a refugee or immigrant. During the festival we will bring to the public’s attention not only all sorts of discriminatory attitudes, but also our behaviour, of all of us, towards the Other, the ease with which we accept stereotypes, both negative and positive, in an attempt to more easily define our own identity.

Approximately 65 selected documentaries will be divided into several thematic sections, in addition to the main theme. In 2020, we are also screening films from around the world that talk about justice, refugees, migrants, the LGBTQ community, women's rights or marginalized categories. We are also preparing retrospectives of renowned international filmmakers such as Ross McElwee and Chantal Akerman and a competition featuring nine exciting films. For the first time, together with the High School Jury, we will also have an International Jury of filmmakers. About 40 international guests will participate in the 2020 edition of the festival, which will take place in seven main locations: Cinema Elvire Popesco, Cinemateca Eforie, ARCUB, Pavilion 32, Czech Center, Universul Palace and UNATC. To conclude the daily program we will gather at Londohome, the night hub of the festival. 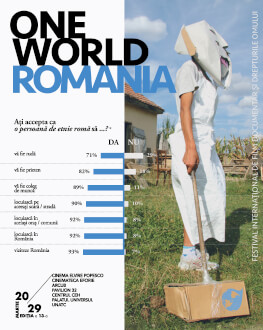