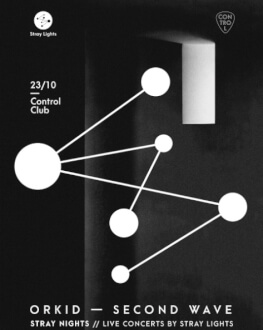 The second back-to-back gig of the 'Stray Nights' series with an EP & video release by dark alternative rock duo Second Wave & a special performance by the ever angry shoegazers Orkid & guests.

Before this, on October 9th, you can catch Stray Night #1 w Zammorian & DayDay @Control.

'Stray Nights' are a series of concerts organized by the Stray Lights, a Romanian indie music community established by Orkid, Zammorian, Second Wave, DayDay, Greetings Sugar & Dor Mărunt. We believe that only with a common effort of our local bands, audience, clubs, promoters, festivals & music critics the Romanian music scene will evolve. We aim to discover & support new bands & new acts & also help the local scene in anyway we can.

Second Wave is an alternative rock duo from Bucharest, Romania and it consists of Daniel Antohi on vocals & guitar and Radu Dorobantu on the drums.
They made their debut in late 2016, since then releasing 3 singles that were played on local alternative radio stations.
With dreamy textures, straight-forward drumbeats and a heavy use of modulation effects, they manage to fill the stage with their sound, although being just a two-piece band >

Orkid is a trio of angry shoegazers howling the post-traumtaic blues.
They are inspired by punk, blues, post-rock & progressive guitar music.
Also, these Psycho-Killer Whales are on a continuous and neverending quest for improving the means of communication between whales, humans and extraterrestrial life forms.