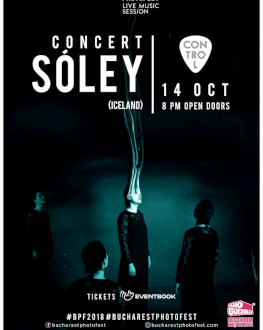 The 2018's edition of the Bucharest Photofest is dedicated to nature, and the focus will be well-earned on Iceland - the country's special guest of this year's edition.
In 2018 we will bring to Bucharest very large names from the international photography.

On 14th of October, Sóley will be performing in Control Club.

Born in Hafnarfjörður, Iceland, Sóley has attracted a huge following with her fairytale song craft over the last years. After the EP “Theater Island” (2010) announced her as a solo musician, the fantastical, sepia-toned alt-pop tunes of debut full-length “We Sink” (2011) already won her a massive, devoted fanbase: Often praised for her delicate take on composition, her songs’ “dream-like” qualities and “dark surrealism”.

Having studied piano and later composition at the Icelandic Art Academy, Sóley Stefánsdóttir, who was formerly a member of the band Seabear, released another EP entitled “Krómantík” in 2014, comprised of piano works and returned to even darker, nocturnal themes with sophomore album “Ask The Deep,” which came out in early 2015.

Her third album "Endless Summer" came out in May 2017 an album focused on more brighter / acoustic arrangements and followed by a number of tours around the world and by the end of the year 2017 "Team Dreams" was released, a collaboration album between Sóley, Sin Fang & Örvar Smárason (múm) as they released a new song on a monthly basis throughout 2017.

A new album is in progress where Sóley is experimenting with new sounds & space, poems about the end of the world & compositions for accordion drone, theremin, voices, mellotron and synthesizes.

Dancer: Special Screening in the presence of Sergei Polunin