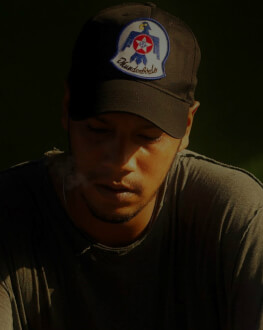 SHAHMEN the illest 7 letter word since OutKast or Nirvana.

“Skin the color of bark. Clothes smelling like trees.”
With that first line from their international smash ‘Mark’,SHAHMEN planted the seeds that would grow a loyal cult fanbase worldwide. Their classic LP ‘All in The Circle’ spawned the viral hit ‘Mark’ which 3 years after its release continues to be featured in everything from racing, gaming, action sports and dancing viral videos. Reaching over 25M streams and number 1 on iTunes.
The spread online has propelled SHAHMEN around the world garnering over 650K followers on Shazam.
The new album ‘California is Cold’ has been their biggest success to date, charting in the Top 200 albums in 15 countries on Apple Music. The iconic music videos for Black Flowers & Poison have taken the fanbase with BLESS through the alleys of Tokyo to the deserts of California capturing millions of new listeners along the way. The Poison World Tour is just the next stop in the journey of SHAHMEN to ascend to hip-hop royalty. Watch.

The group has a signature sound rooted in haunting melodies and heavy drums, carried by the once in a lifetime voice of rapper, BLESS. Like the raspy growl of a wolf, this Black Cowboy in the Wild West has a flow as deep and dark as the stories woven in his lyrics. Hailing from Los Angeles, forming in Amsterdam, SHAHMEN embark on their first World Tour.