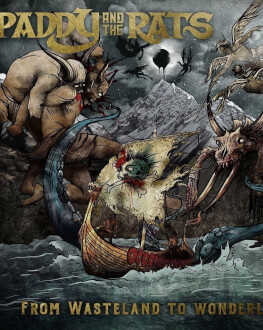 Paddy & The Rats were formed by the singer-songwriter Paddy, Vince (bass) and Joey (electric guitar) in 2008. Then Seamus (drums) and two authentic musicians, Sonny (accordion) and Sam (fiddle, tin whistle, banjo and bagpipe) joined them. In spring 2012 Sonny has left the band and Bernie took his place.

As for their becoming rats, the six „Irish” guys say: punk is the same in music as rats among the animals – dirty and malicious, and that’s exactly what they play. The band is combining pub music with hot and dirty punk rock. To spice up their own songs they use Irish pub music and Celtic features, but you can also feel the mood of the pirates’ and sailors’ world.

The band’s first album – Rats On Board – was released in March 2010 by Nordic Records and it’s available on Itunes and Amazon. The second one is called Hymns for Bastards and it was released in spring 2011.

The third one, Tales From The Docks came out in December, 2012. Those listening to their music won’t definitely stay sober, because the rolling jig rhythm makes everybody dance and even jump – and get drunk! Most of the lyrics are about drinking and pub stories (Fuck You I’m Drunk, We will fight, Pub’n roll).

The forth album – Lonely Hearts’ Boulevard – was released in September 2014 and featured a wider range of music: some songs were more popular, new-folk songs influenced by the likes of Mumford and Sons and Passenger, showing the darker side of the band.
In 6 years they had more than 400 gigs, they took part in festivals in Germany, Italy, France, Hungary, Sweden, Denmark, Austria, Belgium, Ukraine, Russia, etc. At gigs they play their own songs with fiddle, banjo, accordion, bagpipe, whistle – and of course, a lotta rock’n’roll.
Their aim is to introduce the crowd to different kinds of pub music and pub culture…To be more precise: turn the whole world into a pub!