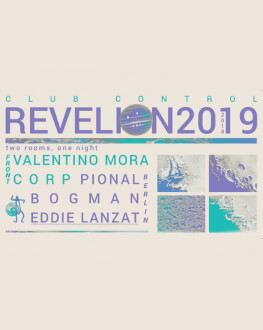 Celebrate all that was good this year, hydrate properly and dance your way into the new. Two dancefloors fun time:

Pional aka Miguel Barros - multi-instrumentalist, empyrean vocalist, top-drawer DJ, composer and producer - at one time Spain’s best kept electronic underground secret. After releasing numerous singles and remixes on labels such as Hivern Discs, Young Turks, Permanent Vacation and being associated with acts such as John Talabot or The xx, Pional settled as one of the most in-demand entertainers nowadays.

Valentino Mora was raised by Uruguayan parents - of which his father was a trained sound engineer and musician, thus he was surrounded by music and exposed to producing constantly throughout his childhood. You may have heard of him as French Fries in the past, founding member of Paris-based imprint ClekClekBoom and key player of the underground French techno and house scene. Valentino Mora has since evolved radically, incorporating influences of movement, expression and soul into his explorations of sound that he has discovered between his travels of Tokyo and since relocating to Berlin.