The eighth album from Marissa Nadler, For My Crimes, is the sound of turmoil giving way to truth. Bolstering the intimacy of these songs is the strong feminine energy that defined their recording. Between co-producers Lawrence Rothman's fluidity with both gender and genre (as heard on his 2017 album The Book of Law), and Justin Raisen's track record of successful collaborations with strong women (Angel Olsen, Kim Gordon, Charli XCX), Nadler felt empowered to explore without judgement in the studio. With the exception of saxophonist Dana Colley (Morphine), every player on the album is a woman of notable pedigree and distinct style; Angel Olsen, Kristin Kontrol (Dum Dum Girls), and Sharon Van Etten all lend vocals, Mary Lattimore joins on harp, Patty Schemel (Hole) plays drums, experimental multi-instrumentalist Janel Leppin adds gorgeous string arrangements, and Eva Gardner plays additional bass.
These women and others helped make For My Crimes as dynamic as it is intimate, but Nadler's mesmerizing voice —stripped of nearly all reverb — is what sits at the center of these songs. You can hear the emotional range of her performances more than ever before, and as a singer, she has never sounded more confident. For My Crimes, Nadler's most evocative entry in an already impressive discography, was released September 28, 2018 on Bella Union and Sacred Bones. 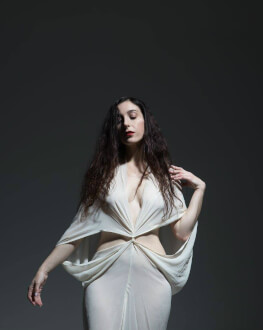