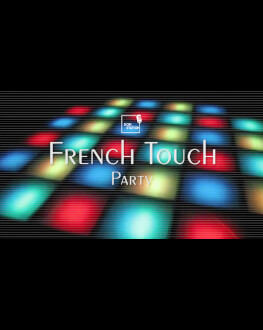 One of the founding members of Télépopmusik, Antipop is performing all over the world, exciting DJ sets mixing deep & acid.
This June, Télépopmusik have released a new single – “Connection” – and a new album will follow in the fall.
2Square & Antipop were locked away in the studio putting together the finishing touches to what will be their third album with featurings from Young & Sick, Betty Black, Angela McCluskey, Mau and Johanna Wedin.
Their elegant sound is now firmly engrained in the public’s subconscious through hit singles like Breathe, sold-out tours and clever sound-tracking on many high-profile advertising campaigns. Yet we should never forget that, above all, they are a band who have only ever simply strived for creative perfection. Their trajectory thus far has been exemplary – a pure case of “letting the music do the talking…”

Known for solo albums and collaborations with musicians of the most diverse styles, Electric Brother brings his RetroElectro DJ set to DokStation.
His first live album was presented live at the Montreux Jazz Festival as well, in 2003, alongside Marta Hristea and Vlaicu Golcea. Rocks, his latest solo album (2016), is the first mixed disc and was presented to the public through the Dolby Atmos system in a cinema room. Between these two events, he signed several albums for collaborations, film soundtracks, theater, advertisements and multimedia performances.
The red wire linking all of the productions and appearances of Electric Brother is a taste for innovation, to catch the listener’s attention, to find new ways of musical expression. The style that characterizes him is self-named “RetroElectro”, meaning everything that is groovy and dance-driven from the jazz and funk genres of the past years, but also from the latest productions in the electro-fusion area.