The relentless duo from Paris whose goal is to mix all kind of Eastern music (North Africa, Lebanon, Egypt, Turkey or Mumbai) with electronic sounds, from pioneering acid house to today’s powerful techno.

Guido Minisky and Hervé Carvalho, both djs for many years and residents of infamous Parisian club Chez Moune, have fallen in love with this music after a trip to Tunisia with Dj Gilb’R. Fascinated by eastern music and its codes, such as complex rhythmic structures, they’ve managed to convince a lot of producers to come along with them on this fantastic voyage and create a track for their ‘Acid Arab Collections‘, which are naturally released by Gilb’R’s label, Versatile Records.

"We don’t paste oriental sounds on occidental beats, we want to embody both cultures without pretending to reinvent oriental music or fooling ourselves by believing we’re inventing eastern dance music. We just want to be part of it, and contribute to this brilliant and enormous masterpiece that this music is, and has been for thousands of years.”

The Mechanical Turk hailing from Switzerland with a taste for traditional folk hymns that effortlessly blend together with modern electronic rhythms.

In a world of crate diggers, willfully eclectic selectors and micro-scene experts, few DJs and producers maintain the curiosity, bulletproof taste and unique identity of Mehmet Aslan. Born to Turkish immigrant parents and raised in Basel, Switzerland, a childhood absorbing Turkish music was only the beginning of an esoteric trip down a rabbit hole of fascinating, often unusual music, enrapturing dancefloors with his own record collection alongside his own, equally varied productions. 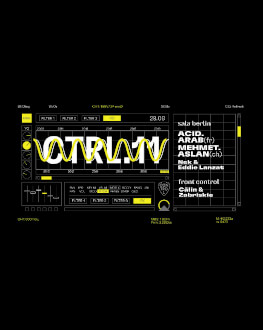