My Night at Maud's 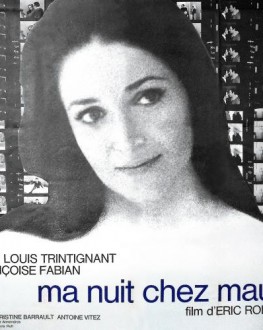 After spending several years abroad, Jean-Louis longs for some peace and quiet. At the church he attends every Sunday, he notices a young blonde woman he fancies and decides that she will become his wife. Then, while at a local restaurant, he meets Vidal, an old school friend, now a philosophy professor at the university. Vidal invites him to spend Christmas Eve at Maud's house. A divorcee, the dark-haired Maud, a beautiful, fascinating and single woman, is not impervious to Jean-Louis' charms.