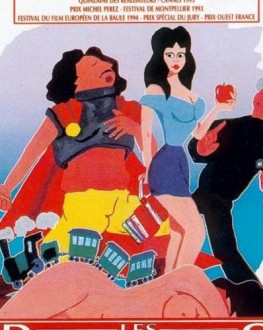 The High-school Girl is feverishly pursued by the nerd in her class, but instead she has secret and platonic encounters with The Soldier, who in turn dreams of going to bed with her. The man she is eventually going to bed with is The Actor, a ladies’ man passing through on tour with an obscure theatre company. Each of the three has a different perspective on the upcoming events.