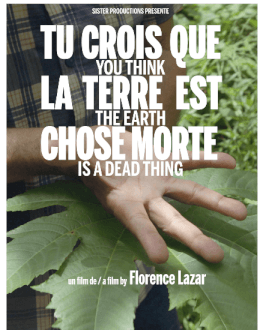 Martinique, with all its appearance of a terrestrial paradise, is in fact an aberration in the 21st century, a residue of colonialism, the present situation of which reminds us, if that was still needed, of its indelible effect on the territories and the populations that it enslaved. Florence Lazar’s film starts from the ascertainment that the island, still under French tutelage, is the laboratory of agri-food industries which, for lack of some strict regulations and a responsible political class, dump their pesticides in the local waters and soil, boosting their production levels at the expense of the people’s health. The film focuses on the locals' resistance strategies, from the classic mass demonstration to attempts to preserve and pass on ancestral knowledge regarding the healing properties of plants. In each shot vibrates a luxurious nature which preserves its splendour in spite of repeated attacks from humans – its resilience, that the subjects often mention, makes itself felt to both those in front of the camera and behind it. The frontiers between farmer, shaman, and scientist become blurred, and Lazar and her team observe this dilation of traditional classifications without expressing any doubts or value judgements. The filmmakers’ refusal to verbally intervene in any way during the shooting, even though it might seem disorienting at first, gives the people a welcome space for their discourses, all the more since they otherwise rarely have the chance to make themselves heard. (Liri Alienor Chapelan)

Florence Lazar is a French filmmaker and visual artist. For the past 20 years, her videos, photographs, and art installations have been shown in museums and contemporary art centers in France and abroad (Musée d’art Moderne de la Ville de Paris, Centre Georges Pompidou, Brandenburgisches Landesmuseum für moderne Kunst, FIDMarseille, Film Society of Lincoln Center). Historical inquiry and historical transmission are the main vectors of her work.