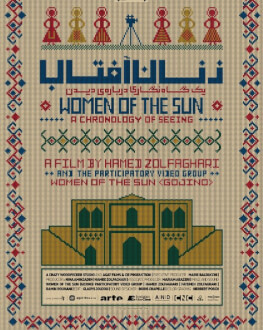 The caravansary of “1001 nights” isn’t the resting place for weary travelers anymore - instead, in Hamed Zolfaghari’s film, it turns into a oasis of liberation from the toxic preconceptions concerning women’s purpose in the world. ”The Women of the Sun” are indeed solar presences: taking their fate (literally!) into their own hands, they start a peaceful, but no less stubborn revolution, by creating a handicraft cooperative and earning their living without anyone’s help. More than this, they begin to document their journey along the film and, aided by the director, they establish the basis of a local movement which busts the myth of women depending on the norms instituted by a world of men. The camera becomes an instrument of emancipation and a tool for expressing one’s own identity, a mediator between the interdictions orchestrated by a patriarchal society and the search for personal freedom. Swimming against the current and against the skeptical fellow villagers, the women don’t succeed in moving mountains out of their place, but their struggle manages to disturb the comfort within which underestimation and the lack of gender equality have dwelt for centuries on end. (by Andreea Chiper)

Hamed Zolfaghari is an Iranian filmmaker based in Tehran and Paris. He is the co-founder of Crazy Woodpecker Film Studio and has made six documentary films which he wrote, directed, and partly produced as well. His works have been traveling throughout international and national festivals, where they have won several prizes. ”Women Of The Sun: A Chronology Of Seeing” is his first feature documentary and it is co-produced by Agat Films & Cie, Crazy Woodpecker Film Studio, and Arte-La Lucarne.