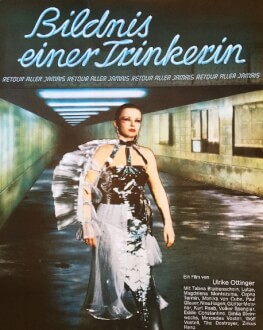 The second feature of Ulrike Ottinger’s career, “Ticket of No Return,” is as transgressive as it gets. The protagonist, played by Tabea Blumenschein, embarks on a one way trip from Paris to Berlin, where she plunges into the city’s nightlife, encountering, in all sorts of shadowy nightclubs, the legendary Eddie Constantine and Nina Hagen, among others. Along the lines of the famous men in westerns, our heroine doesn’t have a name, nor does she ever speak, although she does interact with various characters, including a homeless woman, whom she turns into her lover. In the same way as the tough guys in film noirs, she’s in love with alcohol, which she consumes without break and in various quantities and circumstances. On the other hand, scene after scene, she appears dressed in the most extravagant and flamboyant gowns possible, never wearing trousers, or other accessories generally associated with masculinity. Her ambivalent attitude, which incorporates elements socially and culturally associated with femininity, as well as with masculinity, or with the past and the present, invites [us] to read the discourse of the film through a feminist and queer lens. Nevertheless, don’t expect a didactic discourse, or one which lacks self-irony. First and foremost, “Ticket of No Return” celebrates going beyond the strict norms of society, and presents the beauty and the grace of those situations in which such attitudes can become embodied. (Andrei Rus)