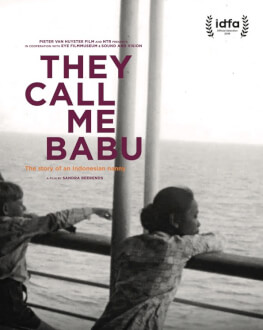 Alima is the lady. Alima is the mother. Alima is Babu. Alima is the nanny of a Dutch colonial family living in 1940s Indonesia. Ostracized by her family for the guilt of not being born a boy, the girl saves herself by running away, in the family which hires her, and in the tenderness awakened in her by the youngest child, trusted to her to be taken care of. In the archival footage we see the fiction through which Alima’s voice carries us, the film of a life measured in distances and final separations, swallowed one by one by the whirlwind of history. The young woman goes through the troubled age of the first half of the 20th century in the same way in which she seems to be going through her own destiny: with tenacity and with eyes wide open in the face of all the plot twists, with the everlasting awareness of the price of freedom and emancipation. Starting from the antechamber of the Second World War, navigating its implacable turmoil and the fights for independence, and then plunging into the disasters left behind by the military troops, Babu not only survives history, but she also gives voice to one of its greatest paradoxes: when you’re part of two worlds engaged in full-blown conflict, making a choice is the hardest mission there is. (by Andreea Chiper)

Sandra Beerends is a script editor, creative producer, writer and director who works for the Dutch broadcaster NTR and runs her own company, Beruang. She edited the scripts for ”Kauwboy” (2012) and ”In Blue” (2018) and she wrote the film ”Arigato” (2012). ”They Call Me Babu” is her directorial debut.