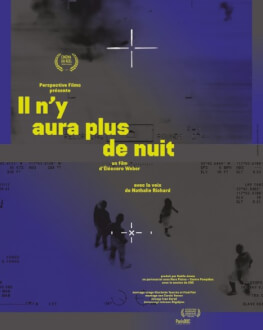 We find ourselves in a military helicopter above some regions of the Middle East. We see the world below us, potential enemies, or farmers working the land, both of them – silhouettes shining from the heat that they emanate. We are compelled to spend minutes on end in the mind of a killing machine, while the director’s voice echoes in the safety helmet, telling us about the irony of seeing a lot and understanding very little.

Apart from the enemies that are being searched, the camera of the helicopter also captures scenes that are not in the area of interest – a family playing a ball game, or a group of kids jumping around joyfully, unaware that they being watched by a force that flies over the playing field without mercy. The murderous gaze of the camera doesn’t even spare these moments that unfold in all their ordinariness and candour, and the atrocity of the film comes precisely from this milimetrical edge of doubt, from the very thin line between the real dangers and the innocents who could come into the air pilot’s visual field at any moment. Eléonore Weber’s film is, among other things, a manifesto on the humanity which lost itself in the era of military technology. And if modern technology is capable of subduing the night, the stars in the sky, however, cannot be taken down by a mere push of a button. (Andreea Chiper)

Eléonore Weber is an author, a theatre and a film director. Her approach explores both the theatre and cinema languages. Regarding cinema, she directed a short and a medium length fiction film, ”Temps mort” and ”Les hommes sans gravité”. She has also directed a documentary, ”Night Replay,” co-written with Patricia Allio. The film relies on reenactments of a role-play invented by migrants.