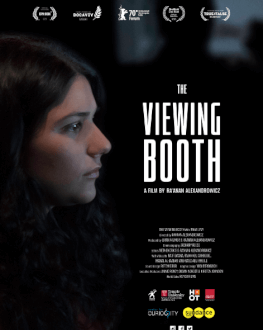 The mass-media of the contemporary world seem to have made a real profession of faith of bombarding the audience with entire waves of information. From amateur images to serious television-commissioned reports, the audiovisual universe overflows with heartbreaking confessions, desolate everyday scenes, terrifying proofs of the terror and the chaos which rule in some parts of the world. However, you still needs to take precautions when you plunge into the vast realm of images and to constantly question their justness, and this is precisely filmmaker Ra’anan Alexandrowicz’s goal. His film stems from a gesture of curiosity and it comes to delve deep into the principle that lies at the basis of cinema itself: what do we look at when we watch a film or a recording? Maia Levy, a young American of Judaic origin, becomes the director’s accomplice and takes on his challenge to comment on YouTube clips of the life of Palestinians living under Israeli military occupation, while her reactions are captured by a video camera. Faced with the filmed sequences and the recording of her answers, the girl experiences both doubt and empathy, as well as the temptation of taking sides. The interpretation of the images turns into a slippery, and to a large extent perverse process, one which depends upon the prejudices and the emotional state of the viewer, and which cannot be reduced to absolute objectivity. Because, in essence, a film is as many films, as are the spectators walking into the movie theatre. (by Andreea Chiper)

Ra’anan Alexandrowicz is a director, screenwriter and editor. He is known for the documentary

”The Law in These Parts” (2011), which received the Grand Jury Award at the Sundance Film Festival, a Peabody award, and numerous other prizes. Alexandrowicz’s single fiction feature, ”James’ Journey to Jerusalem” (2003), premiered in Cannes Directors’ Fortnight and at the Toronto International Film Festival. Alexandrowicz served several times as an editing advisor for the Sundance Documentary Fund and his film, ”The Viewing Booth,” is supported by the Sundance Art of Nonfiction initiative.

Present-day Bethleem looks like a space haunted by the ghost of a gloomy future. At the same time a letter, a diary, and a video essay, Emily Jacir’s film condenses all the urgency of a present threatened by chaos and ruin into 40 minutes. Several cities rise out of Jacir’s Bethleem, lying one on top of the other in the maelstrom of history: each era shattered the core of the previous one, the green fields turned into a conglomeration of houses, and the humble peace of the people melted into armed conflicts and tear gas reserves. Wandering around places from her childhood, the director sketches a map of the most important symbols of the city, as if all the paths of Bethleem led to a unique destination: home. P.S.: Where to go back to, though, when your natal city becomes a little pile of smoking lumps and the only thing that you remain with is the memory of someone waving from a hazy photograph? (Andreea Chiper)

Emily Jacir (born in 1972 in Bethlehem, West Bank) is an artist and filmmaker who is primarily concerned with questions of transformation, translation, resistance, and silenced historical narratives. Her work investigates personal and collective movement and its implications on the physical and social experience of trans-Mediterranean space and time. Her works have been shown all over the world in solo and group exhibitions. She is the Founding Director of Dar Yusuf Nasri Jacir for Art and Research in Bethlehem. She is based between Ramallah and Rome.