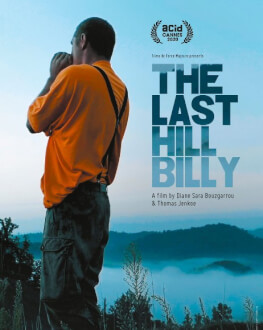 Once Trump got elected as the president of the United States, the term `hillbilly` gained significant visibility: used to describe a certain category of rural population, economically deficient, uneducated, conservative, and intolerant, which supposedly formed the largest part of Trump’s electorate, the notion actually worked as a cover for a much more complex and uncomfortable reality. It is in this reality that Diane Sara Bouzgarrou and Thomas Jenkoe’s documentary immerses us, adjusting itself with remarkable ingenuity to the mentality and the sensibility of these American Dream agonizers, a strategy which pre-empts a condescending or ironical gaze. The guiding voice of the film is that of Brian Ritchie, a middle-aged man from Kentucky who looks with lucidity and brash lyricism both at the past, at his parents’ generation - the pioneers of industrial coal mining, who left the landscape disfigured and the soil barren -, as well as forward, at this children, who are suffocating in spite of the immensity of the places where they live, and dream of another way of life. Torn between fervor and self-criticism, Richie declares himself the last hillbilly, but the living tissue of the film contradicts him: as long as these vast fields, these rocks, these forests will continue to exist, so will the people whose dignity will dwell within their bounds. (Liri Alienor Chapelan)

Diane Sara Bouzgarrou and Thomas Jenkoe live and work together in Lille.

Both raw and sensitive, Diane Sara Bouzgarrou’s films are inhabited by characters haunted by their loneliness and exiled within themselves.Her previous film, ”I remember nothing,” was acclaimed in festivals, in France and abroad (Cinéma du Réel, Torino Film Festival, RIDM).

Examining the problem of Evil and borders (be it mental, moral or social), Thomas Jenkoe questions the divorce between Humans and the world in our modern societies. His previous film, ”Memories from Gehenna,” won the French competition award at Cinéma du Réel and has been shown in prestigious festivals (IFF Rotterdam, DocFortnight at MoMA in New York).