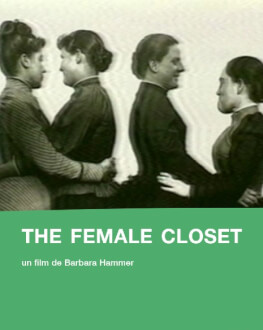 In "The Female Closet," Barbara Hammer explores the misrepresentation of lesbians in art history through a look at the lives of three female artists, Alice Austen (1866-1952, an early twentieth century Victorian lesbian documentary photographer), Hannah Höch (1889-1978, a Weimar Dadaist artist recognized for her photomontages created during the 1920’s and 30’s in Berlin), and Nicole Eisenman (a contemporary New York painter), using interviews, home movies, archival photographs, photocollages and paintings. This film is a look at the relationship between art, life, and sexuality, examining the museum as closet and the negotiation of visibility, secrecy, codes and knowledge in lesbian history. Barbara Hammer demonstrates how these artists’ sexuality - whether closeted or not - influenced their work, careers, and legacies: this buried history is revealed and lesbian contributions to art can be known. (by Vanina Vignal)

Barbara Hammer (May 15, 1939 – March 16, 2019) was an American feminist film director, producer, writer, and cinematographer. She is widely considered to be one of the pioneers of queer cinema. Hammer has directed over 80 films and videos. Some of her most famous works are ”Nitrate Kisses,” ”Tender Fictions,” and ”History Lessons,” which became classics of lesbian and gay experimental cinema.

Paris, 1971. Carole Roussopoulos films the first French gay and lesbian demonstration - with banners like "faggots in the streets!" - within the traditional 1st of May Union demonstration (where they were not invited) to denounce the oppression and homophobia of French institutions and French people. She chooses to edit these images with a discussion - often very personal - which took place a few weeks later at Vincennes University during a philosophy class of the French philosopher Georges Lapassade. Among the activist men and women from the recently created "Front Homosexuel d’Action Révolutionnaire" (The Homosexual Front for Revolutionary Action - F.H.A.R.), we find lesbian feminist Anne-Marie Fauret and Guy Hocquenghem. They reflect on their desires as well as their will to start to politicise the private ("politiser le privé"), the same way the feminists were doing it. They aim to break down the prejudices and raise awareness on a social taboo - all struggles that are still on going in France but as well as in Romania. (by Vanina Vignal)