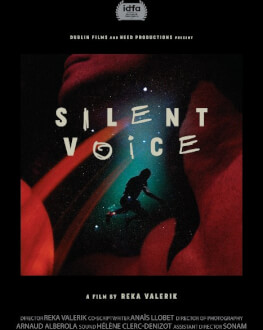 Running away from home isn’t always a childish teenager’s play: Khavaj knows it all too well. The young man from Chechnya plunges into the unknown out of the almost paralyzing fear for his own life, threatened in his native country by his assumed homosexuality, he gives up his home amidst his family because intolerance turned even those dear to him into judges and executioners. Here, in Belgium, the country he escapes to, the days go by slowly, drenched in the ever-present tension of the unseen danger, and the incapacity of expressing the pain through words is even more excruciating than the separation from his homeland. The voice of the mother emerges like a message from another unreal, magical time, an incantation wherein one can distinguish both the curse and the blessing. Between the attempt to cope with a menacing past and the new identity, arisen out of the most urgent necessity, goes on a silent war for survival. Khavaj is like a puzzle made of tormented silences, a body hidden in the shade, licking his wounds far from the hungry looks of those outside. (by Andreea Chiper)

The Producers: "The director is Chechnyan and lives in Europe but for security reasons we can’t disclose his identity. We therefore do not give any information about his biography or his filmography."

Any Western filmmaker who aims to explore a culture radically different than their own and particularly dense, like the Japanese culture, finds themselves confronted with an enigma that is as complicated as it is seductive. The most inspired ones, from Chris Marker to Werner Herzog, didn’t stop at capturing the mere unfolding of life, but they added a layer of fiction, of artifice, of imagination, because they understood the central role played by the invisible in Far Eastern philosophy and spirituality. The same thing is intuited by Ulrike Ottinger, and her solution is to weave a narrative that includes several folk or high literature stories which sometimes advance in parallel and other times intersect the daily life of the people from Japan’s Echigo region. The latter is also known as “The Land of Snow” and, in consequence, people have accommodated their activities and rituals so as to be in harmony with the exceptional meteorological conditions. And it is only this fact, in such contradiction with the modern attitude which tries to make nature bend to the needs of the human species, that indicates to the viewer that they have entered a realm where time flows in a different manner. The snow which flattens and makes the space uniform might seem to empoverish the visual dimension, but it also erases the marks of contemporaneity, allowing the filmmaker to make her characters evolve among the real situations with a naturalness rarely found in cinema – with the exception of, precisely, the Japanese cinema. (by Liri Alienor Chapelan)