Deschiderea One World Romania, ediția a 14-a 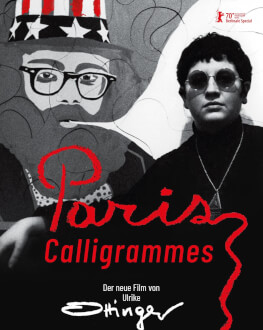 In this most recent film of hers, Ulrike Ottinger recalls her youth years spent in 1960s Paris, before her return to Germany, and the start of a new career in cinema. Although it’s her most straightforwardly autobiographical film, we rarely have the chance to see her in one of the many photographs or moving images which restore that era. What she ventures to do is rather to revisit defining places in her cultural formation, many of them already gone in the meantime, to recover figures which were legendary for the artistic milieu of that time, many of which fell into oblivion, as the generation they inspired, whether directly or indirectly, gradually disappeared, and to recompose a certain spirit of those times and, especially, that of the circles of friends and of the places which were important for the bohemian community she used to frequent. In the little over two hours of "Paris Caligrammes,” the density of the information patiently offered by the director’s voice, and illustrated by many, many collages and associations of visual fragments of various origins, comes to function as a travelogue of the city itself, engaged in the search of lost time. We are catapulted, as if miraculously, in another, long gone era and long gone place, and we are carried, as if in a dream of which we know it took place for real too, through all sorts of dens, and amidst all sorts of people, the existence of which we find out about for the first time, yet which seem to be part of a sort of myth that only initiates get to have access to. (by Andrei Rus)