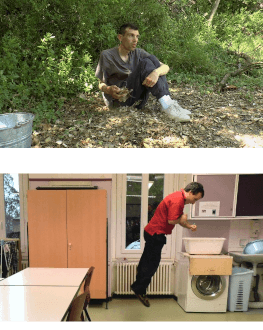 This short documentary devoid of words, but not of sounds of the outer life, captures the day to day life of a community formed largely of autistic men and women. Ever since 1967, director Jacques Lin has lived among them, in the context of a medical experiment initiated by the legendary Fernand Deligny, and filmed them during their daily activities – when they were eating and when they were preparing their meals; when they were painting, or gardening; when they were enjoying, in the same space, but each on their own, the music played by bands specially brought to cultivate such pleasures. Lacking commentaries and any other information that would explain what Deligny’s – by all appearances successful - experiment consisted in and choosing not to present the protagonists individually, “None of Them Says a Word” rather works as a home movie addressed first and foremost to the people on screen and to those dear to them. Only that, since it documents a therapeutic process which lay at the basis of several innovatory treatments for autism, it automatically becomes relevant for a much larger number of viewers. And Lin’s tender, warm approach, from the inside, which all those in front of the camera seem to accept without any sort of inhibitions, paints a collective portrait of people who live in harmony and who, leaving the disabilities which unfairly marked them aside, enjoy every moment spent in this environment. (by Andrei Rus)

Jacques Lin is a French filmmaker and author. Together with the artist Gisèle Durand-Ruiz and other non-professional educators, he lived for more than 40 years in the company of autistic people. He is the author of the book "La vie de radeau, le réseau Deligny au quotidien."

The definition of the house could be as follows: a place of routine, at the same time closed and open, in which you can circulate freely, a refuge or a stopover on the path of life, which is played mostly outside its walls. To reference back to the words of the mother of one of the seven psychologically challenged youngsters we watch during Judith Auffray’s film, it is a place without keys, locks, and codes, a place where you can imagine yourself spending your entire life. It is precisely a house in this sense that is usually refused to marginalized, or alienated people, to those who don’t fit the norms and are incapable of producing anything “useful,” having here in mind the definition that our societies give to this term. Those responsible with the small institutions that Auffray bring us into consider, in the vein of the pedagogue Fernand Deligny, that a human being needs to get what he or she deserves – dignity, intimacy, autonomy, in a word a house – for the mere reason that he or she is a human being, not in exchange for his or her utilitarian participation in society. The filmmaker doesn’t attempt to find out whether living with others, close to nature and freed from the constraints of the psychiatric ward as we see the seven youngsters doing, is a clinically efficient method. Her goal seems to be rather to map out the external manifestations of their obscure inner life: the slightly disarticulated manner in which they move their bodies, their immense energy, the way in which they occupy the space without trying to take it over, their enigmatic relationship with objects. (by Liri Alienor Chapelan)

Judith Auffray is a painter and filmmaker born in 1993, in France. In 2015 she graduated in Fine Arts from the École Nationale Supérieure des Beaux Arts in Lyon, while in 2019 she completed her BA in Film at the HEAD – Genève. Between 2016 and 2019 she shot several films in experimental centers for autistic persons, in the south of the Cévennes region, France. ”A House” is her first feature.