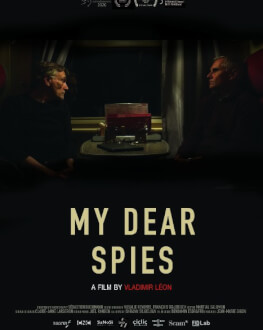 A bizarre family inheritance: some mysterious documents, an apparently innocuous diary, and, slowly, slowly, doubt creeps in. One day Vladimir and Pierre Léon confront the unsuspected possibility that their grandparents may have been Soviet spies sent to Paris during the Cold War, and their curiosity leads them to go on a journey full of surprises into the heart of Russia, with all its carefully guarded secrets. The Léon brothers embark on a road movie which is simultaneously intimate and full of adventure, as they come upon all sorts of new leads at every step, leads which, instead of bringing them closer to having the family secrets revealed, only throws them back in time, back in the days when a cardboard suitcase could hold a whole world within it. The conclusions of their investigation crash into each other, they are ambiguous and permanently open to other interpretations, yet the only certainty that remains is the past which defends its mysteries at all costs, deceiving us with glimpses of understanding which last only for a second. Today’s Russia is a treasury full of vestiges from various eras and regimes, intertwined to such a degree that there’s nothing but confusion left, and kept religiously in the glass cases of a dusted museum. (Andreea Chiper)

Born in Moscow in 1969, Vladimir Léon has directed several documentaries (Nissim aka Max, The Comintern Brahmin, Farewell Radiator Street The Polyhedron and the Elephant, My Dear Spies), as well as fiction films (Far from the Front, The Angels of Portbou). In 2008 he founded the production company Les Films de la Liberté, and started producing both fiction and documentary films for directors such as Julie Desprairies, Serge Bozon, Véronique Aubouy, Pierre Léon, Arnold Pasquier. He is also an actor.

Venom: Let There Be Carnage