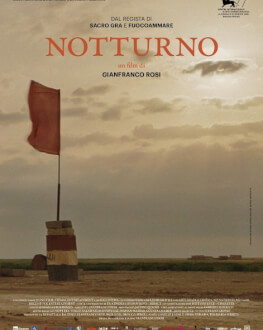 Irak, Kurdistan, Syria, Lebanon - this is how Gianfranco Rosi’s itinerary looks like for three years, years in the course of which the skeletal structure of "Notturno" was sketched during the director’s peregrinations. The Middle East is a space of contrasts, and what Rosi does is to bring these contrasts face to face, and to efface the moral or territorial borders between the world on screen and the viewer. The filmmaker observes the military troops marching through mood in the same way he observes the children as they recall the atrocities they lived through as prisoners of the soldiers in front of the therapist. War and tyranny, the images seem to remind us, are a fatal mixture which dwells even in the darkest of corners, giving birth to unimaginable monsters in all the things it encounters along the way. And cruelty, in the end, is just an army formed of all these monsters brought together in one place. Rosi’s film is a chronicle of a world torn between the nocturne of the postdiluvian disaster, and the light slipping into the little gestures which invoke salvation - a prayer in the night, an indistinct whisper, the sun-whipped face of a child with big, sad eyes. (by Andreea Chiper)

Gianfranco Rosi was born in Asmara, Eritrea, and has both Italian and American citizenship. In 1985 he graduated from the New York University Film School. In 2013 he won the Golden Lion at the Venice International Film Festival with ”Sacro GRA,” a film about life along the Grande Raccordo Anulare, the ring road highway that circles Rome - this was the first documentary film to win the Golden Lion. Later on, in 2016, Rosi received the Golden Bear at the Berlin International Festival for his film, ”Fire at Sea,” about the people from the island of Lampedusa.