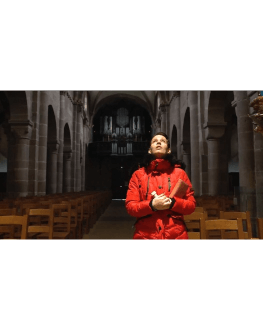 How to avoid miserabilism when you’re filming destinies apparently preconditioned by a limited and inflexible social and economic context? One potential answer could be: by filming them for a long enough period of time and from a short enough distance that the contours, the generalities, and the thick strokes fade away and only the core remains. This core isn’t made up of the wishes, the fantasies, and the representations of self and of the world of only one person, but those of the generations which preceded them as well. Marie Dumora spent over twenty years with and dedicated five films to a Yenish family from Eastern France, first following Sabrina, a young girl who grew up under the eye of the director’s camera, between her family and foster care, before giving birth to a boy herself – Nicolas, whom she also gave up to foster care. The latter is the protagonist of “Far from You I Grew” - a teenager carrying a heavy sociological legacy, which he doesn’t know whether he should reject or embrace. The film’s "direct cinema" style, which bears witness to Dumora’s long experience and her familiarity with the characters she observes, is sometimes contradicted by more apparent auctorial marks, which remind us that we’re not simply watching some people struggling to broaden their horizons, but instead we’re watching a human being watching them – hence a certain form of tenderness, and of delicately entering the intimate space of persons who refuse to be reduced to clichés about social determinism, delinquency, or motherhood. (by Liri Alienor Chapelan)

Marie Dumora shoots her films in Eastern France and, as a result, she has created her own cinematic territory. The character of one film leads her to the next, meaning that we occasionally find them again several years later from one film to the next. Her films have been screened and won awards in numerous festivals: the Berlinale, ACID Cannes, Sao Paolo International Film Festival, the Viennale, Indie Lisboa, IDFA, Pune (India), Doxa Vancouver, Le Festival du réel, FID Marseille.