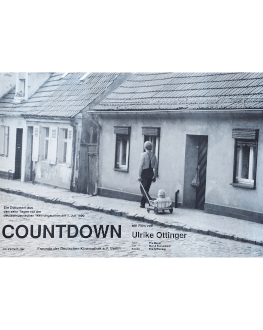 At the end of June 1990, seven months after the fall of the Berlin Wall, four months before the political reunification of the two Germanies, people are counting down the days before the Monetary Union: the day when the D-Mark, the official currency of the Federal Republic of Germany (West), will become the official currency of the German Democratic Republic (East), replacing the Ostmark. Ulrike Ottinger spent the ten days before this "first stage of the German reunification" filming locations in Berlin and Brandenburg - in the East and the West -, scenes in which she takes the time to record the everyday life that unfolds before her at this critical moment: people walking on what used to be the Death Strip along the Berlin Wall or hammering away on the Wall, children playing in the streets, East Germans waiting in line at the discount stores in West Berlin, or the Eastern (emptier) stores doing their annual stocktaking. The director’s filming and editing choices convey to us the different rhythms of life depending on the places where Ottinger is, they enable us to be in between these two time frames - two worlds -, to sense the political depth and complexity of the situation without necessarily having all the historical tools. A masterpiece. (Vanina Vignal)