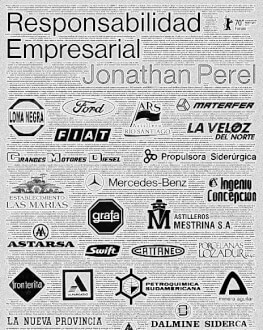 Recent developments in the European political landscape, like the rise of the far right when it comes to voters’ intentions among citizens from almost all states of the region, clearly demonstrate that the horrors of the past can be forgotten alarmingly fast. Others of them, however, don’t get to be forgotten, as they don’t even emerge out of the shadow under which disinterest, weariness, fear, or any other events which are more spectacular in their abomination place them. The latter case is probably the reason which explains why the numerous cases where national and international companies were accomplices of or active participants to crimes against humanity committed by the Argentinian military regime between 1976 and 1983 are so unknown even in the country where the events took place. With the documentary “Corporate Accountability," filmmaker Jonathan Perel’s aim is not so much to inform the general public - the cinematic device of his film is way too demanding to ascribe such intentions to him - as to experiment with the possibilities arising out of the clashes between story and image, as well as the related restructurings. The film has two main elements: on the one hand the voice of Perel himself, who reads from a National Judicial Information Center report on the workers repression during the military dictatorship, and, on the other hand, shots filmed through the car’s windshield, which show the facades of the factories, the executives of which participated in the above mentioned events. Fourty years later, some of them have the same function, while others are in ruins - in both cases the temporality of the static shots seems to amplify under the influence of the unvarying tone which describes acts of cowardice or criminal ardour, and the details of the images become charged with the thought that in these places people worked, and then they were simply sold to their executioners. (Liri Alienor Chapelan)

Jonathan Perel (born 1976, Argentina) graduated from the Faculty of Philosophy and Literature of the University of Buenos Aires, with a degree in Arts. His films have been screened at numerous international film festivals, where they have received important awards, while his works have been exhibited at Palais de Tokio (Paris), Haus der Kulturen der Welt (Berlín), Museum of the MovingImage (New York), IMS Instituto Moreira Salles (São Paulo, Río de Janeiro), and so on. He lives and works in Buenos Aires.