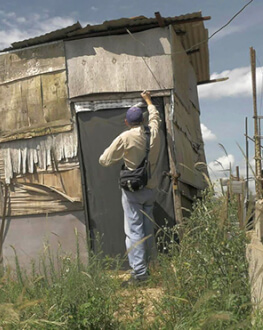 "Las Brisas de la Santa Cruz" is one of the marginal neighbourhoods of Caracas, a neighbourhood through which many owners passed over time, worn down by the financial crisis, and jeopardized by the unfortunate politics that govern it. The capital of Venezuela is in its own right a space torn down by protests and the uncertainty in the midst of which its residents live, especially those from the periphery of the city, built on a fragile structure, and ready to shake at the slightest breeze. Alejandra and Keyla find themselves in the core of this uncertainty, exhausted by fighting windmills, yet keeping their determination alive, being aware that cowardice leads nowhere, and that real change is a mountain that needs to be climbed step by step to the top, obstacles and all. In the attempt to save their neighbourhood from the precariousness in which it sunk, the two of them plunge into the dizzying maelstrom of bureaucracy, more dreadful than the suffocating heat of Latin America, and more disarming than a victory with which the war only begins. The irony is that the price paid to write the history of the neighbourhood is a new history, one recorded in the flesh and lived at full intensity amidst the deadly fire of fighting for the certainty of tomorrow. (by Andreea Chiper)

After studying cinema and literature, and several collaborations with the theater in the 2000s, where she created videos integrated into the scenography, she was a student of the Ateliers Varan in 2005. In 2007, she made her first trip to Venezuela, where she shot a documentary. She is also an author and writes creative documentary projects.