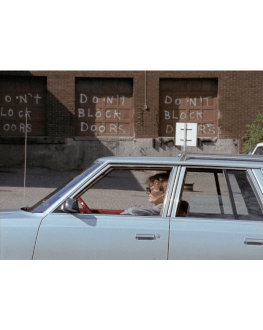 At the end of the ‘70s, actress Delphine Seyrig discovers and reads a book containing the letters sent by Calamity Jane to her daughter, sometime during the second half of the 19th century. And this encounter makes her want, for the first time in her life, to direct a biographical film, in which she would play the part of the protagonist. Calamity Jane had long been a symbol of the feminist struggles around the world, being a comics, popular songs and Hollywood films hero. In fact, her life had been full of novelesque adventures even before becoming one of the most famous adventurers of the Wild West – actually the only woman who came to rival men in popularity in this regard. She had been, one after the other, a cook, a dancer, a nurse, a laundress, a waitress, a prostitute, and, following her enrollment in general George Armstrong Custer’s squad, she had given up her own children, whom it seems she had given up to adoption, and she had started dressing in men’s clothes, dedicating herself fully to the her new role, which actually brought her national fame. The film of Babette Mangolte, a legendary cinematographer and feminist artist – among other things, she collaborated with filmmakers such as Chantal Akerman on works such as "Jeanne Dielman, 23 rue du commerce, 1080 Bruxelles" and “News from Home,” or with Yvonne Rainer on "Film About a Woman Who…" – reenacts a part of Delphine Seyrig’s journey as she was preparing that biographical film which she didn’t get the chance to finish. Through notes and annotations from her diary, also including a part of the footage shot by Mangolte herself with Delphine Seyrig and the women she’d interviewed to prepare for the role, "Calamity Jane & Delphine Seyrig, A story" is a tribute to the two women and a touching recovery of fragments of a project which remained locked in some boxes for over three decades. (by Andrei Rus)

Born in 1941 in Montmorot, France, Babette Mangolte is a graduate of the Ecole Nationale Supérieure Louis-Lumière. She moved to New York in the early 1970s, where she met Chantal Akerman: the two shared a feminist point of view and collaborated on numerous films. A privileged witness of the New York art scene, Magnolte made several films about performance, dance, and theatre with Trisha Brown, Yvonne Rainer, and Robert Morris.