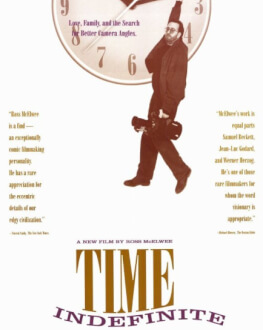 One of the densest and most philosophical episodes of the series, “Time Indefinite” depicts a complicated and eventful time in Ross McElwee’s life, initially marked by his marriage to Marilyn Levine, shown in the beginning of the film, then by the sudden passing of his father, followed by Marylin’s miscarriage of her first pregnancy and, finally, by the birth of Adrien, the couple’s first child. In many ways, the film is one of the filmmaker’s most self-referential works, and the analogies with other socially and politically relevant contexts are limited here to a few reflections, without being integrated in the main narrative structure. McElwee’s attempt to better understand himself and accept his new role as husband and father by analyzing his relationship with his family — not only those alive, but also his grandparents’ and father’s generations — creates a setting where a melancholic tone is often mixed with candid observations and with the revelation of everyday epiphanies. The beauty of the film is the result of all these factors and, above all, of the way in which they leave room for one other, each time adding one more piece to the filmmaker’s attempt to understand, or at least to intuit the meaning and significance of his own existence. (by Andrei Rus)