Gypsy + How Far the Stars 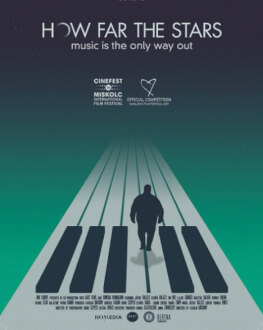 Cars, trains, the signs of modernity flicker at the edges of a Roma community seemingly lost in time. Funerals, kids going to school, adults riding bicycles home from work — fragments of Roma life in early 1960s Hungary, filmed poetically in harsh black and white film stock that works to distance them from contemporary life in both time and space. Yet contrapuntal close-ups of melancholy and resilient faces and occasional synch-sound interviews bring in an immediate empathetic dimension that counterbalances the anthropological, exoticizing vision characterizing the time’s few documentaries on Roma. This archival film produced at a time when interest in Roma started spreading among East and West European documentarians bears the marks of its time and points to the representation possibilities of the future. (by Mona Nicoară)

How Far the Stars

József Balázs, a gentle and melancholy teddy bear of a man, is a young father drowning in debt and unfulfilled dreams. In a Budapest increasingly isolated from the rest of the world, he sits down at his upright piano, which is perpetually under the threat of repossession, to compose in a musical style that combines traditional Roma folklore with contemporary jazz — a hybrid genre whose tradition goes back to the days of Django Reinhardt. When Tim Ries, a successful American jazz saxophone player who sometimes tours with the Rolling Stones, comes to record and play with József’s newly formed group, the East Gipsy Band, the skies seem to open up. József begins to hope to play in America and to get a contract with a major record label, but dreams are always smoother than reality. Without class or race resentments, this discreet documentary made by the Hungarian director of Roma origin Katalin Bársony explores a universal theme: the condition of the artist in today’s harried world. (by Mona Nicoară)