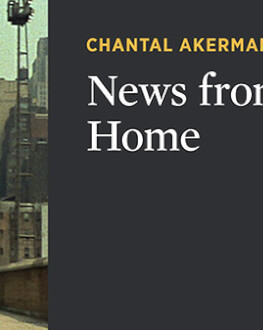 In “News from Home,” various pieces of footage from 1970s’ New York, filmed in locations that, far from being scenic tourist attractions, are rather just part of the locals’ daily commute and largely go unnoticed, are marked by the filmmaker’s voice over, reading out loud letters received from her mother, living faraway in Brussels. Her news is just as mundane as the accompanying images: she tells her daughter of her (fluctuating) health, of her father’s constant nervous breakdowns, of her younger sister’s development, or expresses concern about Chantal’s own wellbeing among strangers. Akerman’s hyperrealism reaches its peak with “News from Home,” where the images and sounds of the streets suffuse the viewer’s perception, often hindering and blocking off the intelligibility of some of the reports in the letters. “News from Home,” a stepping stone for many of the filmmaker’s later film-essays, should be on the watchlist of any cinephile who is interested in the evolution of modernism in cinema in the second half of the previous century. (by Andrei Rus)