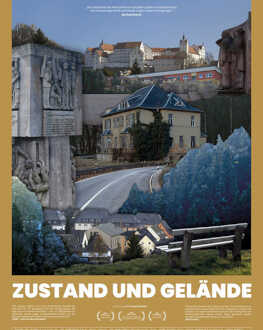 What we do not know about the history of the German concentration camps in the 20th century is that, immediately after Hitler’s full seize of power, "protective custodies" (spontaneous camps) were set up by the state - or by zealous citizens - all over the country. Whoever was suspected of not having the right political view was taken to these camps, supposedly to "protect" them from the rest of the population, to re-educate them. Stylistically, the editing mixes long-shots, filmed in the present day, of the urban spaces where these camps were improvised, with voiceovers reading out letters of victims describing what they went through, official documents of the Nazi authorities, police reports, administrative correspondence or extremely precise documents of the camps administration.

Slowly, this succession of facts - the dates of the documents are always mentioned - narrated along the images of today's Germany, makes us feel the traumatic experience endured by some German people and how many others embraced the extremist ideology, in a very practical and methodical way, without questioning it. Ute Adamczewski succeeds in making us understand how extremist ideas can suddenly arise within a democratic country, but, moreover, she also succeeds in making us link these historical facts to what is happening in our present world: more than echoing a traumatic past and the rise of Nazism, the film talks about the rise of extremism and populism within our countries today. (by Vanina Vignal)