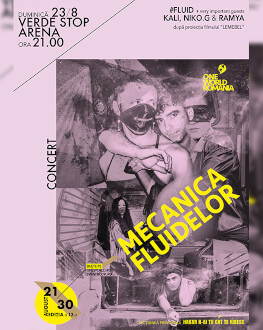 In Chile, during the dictatorial regime of Pinochet, who, beginning with 1973, ruled the country for almost twenty years, a gay activist performer pushed the boundaries of the system to such an extent that his entire life became living proof that art can indeed be a powerful weapon against totalitarianism. The performer is Pedro Lemebel and he his one of the most important activists for LGBTQ+ rights and a widely acclaimed writer and essayist, whose autobiographical works have always sparked debates and protests alike. Lemebel’s close friend, director Joana Reposi, compiles archival footage, TV excerpts, photographs and interviews, creating a riveting and at the same time revolting portrait, where the protagonist’s passion and perseverance light his journey through the oppressive Chilean regime. (by Teona Galgoțiu)

Fluid mechanics is the science that deals with the balance and movement of fluids and their action on the surrounding walls or on bodies immersed in them, at rest or in motion.

A sound metaphor that intersects the fight against racism with that for the LGBTQIA + community. A performative concert against oppressive systems that act racist and queerphobic.

Kali (Mihaela Drăgan) is an actress and playwright who lives in Bucharest and works in other several countries. Since 2014 she is the cofounder of the Roma feminist theater company Giuvlipen - ”the avantgarde of the Roma Revolution”. She is the youngest finalist for The 2017 Gilder/Coigney International Theatre Award from New York which acknowledges the exceptional work of 20 theatre women around the world. In 2018, she was a resident artist in Hong Kong at Para Site Contemporary Art Centre where she was developing Roma Futurism - that lies at the intersection of Roma culture with technology and witchcraft.

Niko G (Nicoleta Ghiță) is an actress, she is young and very talented. She transmits messages through music and theater and tries to motivate those who believe that "life has offered them little.” Since 2015 she has been part of the group Playhood, a group of young artists from the Ferentari neighborhood of Bucharest who combine education with performing arts. In 2018 she has joined Giuvlipen theatre and can be seen in ”Sexodrom” and ”Romacene: The Age of the Witch” shows.

Ramya is a sassy, nasty, gorgy, sexy, intenssa and fishy drag-queen from Romania.She is an artist who performs on the independent music scene as an mc and music producer. Also she is an actress on roma theatre scene in which she represents topics such as: racism, sexism, homophobia, transphobia, class differences, gender, etc.

The performance will start after the screening of the film „Lemebel”  and is part of a series of events in which we celebrate the history and culture of Rome people!