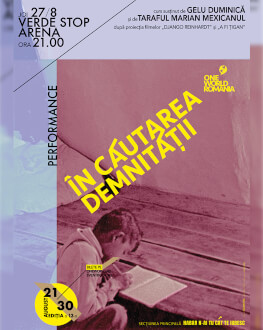 A concert - performance by Gelu Duminică and the Marian Mexicanu Band

In this unique event, professor and Roma activist Gelu Duminică invites us to consider the contribution of the Roma minority to the evolution of Romanian folklore. The lecture will combine facts about the history and culture of the Roma people with the music of a band performing live on stage, for 90 minutes. The band will be led by the great accordion player, Marian Mexicanu.

This event organised by One World Romania is part of Gelu Duminică’s university class held at UNIBUC - School of Sociology and Social Work; in recent years, it has been hosted by all major universities in Romania and has enjoyed great success among students.

*This event will be organized in partnership with Împreună Agency

The performance will start after the screening of the film „Django Reinhardt” și „Being Gypsy” and is part of a series of events in which we celebrate the history and culture of Rome people!