Blow Up My Town + From the East 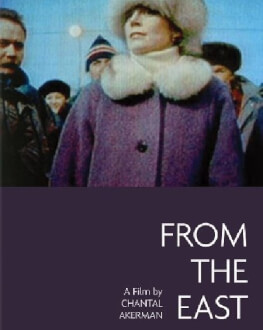 A few years after the fall of the Iron Curtain, Chantal Akerman would embark on a journey through ex-communist countries, from the former German Democratic Republic all the way to Moscow. Her project is somewhat exploratory, but also demystifying: her patient observations leave plenty of room for contemplation, without stereotyping either the people, nor the widely known, now turned legendary habits of the former Eastern Bloc (queuing for supplies, the fastidious slicing of salami, the sorrowful Russian songs, etc.). Fluid or static, landscapes and portraits succeed one another and, from tiny fragments of the everyday, piece together an overview of cultures at a turning point: large crowds of passengers waiting in a train station, a few women working the land, children playing in the snow and, somewhere else, people waiting for the bus on a bluish winter morning. Akerman, protecting their anonymity, strips nothing of their charm; though we can only see them for several seconds, the people and their bewilderment, boredom or indignation become objects of fascination, windows for the viewer.

The hypnotic effect of the film is given both by the languid succession of shots, and by a series of mirror-moments, in which the people look directly into the camera, into the viewers’ eyes. It is at times like this that history seems to be freeze still, and the look in their eyes becomes a glimpse beyond time. (by Andreea Chiper)

Blow Up My Town

At only 18, Chantal Akerman would lay the foundation of her oeuvre with this burlesque short, which is better appreciated when considered side-by-side with the film that, a few years later, would bring her recognition: “Jeanne Dielman, 23, Quai du Commerce, 1080, Bruxelles.” The Belgian director called “Saute ma ville” “the mirror image of Jeanne Dielman.” Still, even without this point of reference, her debut is an anarchical farce, humorously and imaginatively denouncing the absurd ritual of housework chores. The film is a cultural testament of its era, while already bearing the imprint of Akerman’s unmistakeable voice and the revelation of her talent as an actress – gleeful at times and sulky at others, the protagonist has the freshness of an adolescent, the defiance of the students of May ’68 and something of the wobbly grace of Chaplin or Tati. (by Liri Alienor Chapelan)